My Phone Conversation With Garth Brooks

My Phone Conversation With Garth Brooks
The Mark Twain Cave Gift Shop ordered "I have friends in low places" T-shirts.  When they came in I was the first to have one because Garth Brooks is one of my all time favorites.  I dug down through the pile and pick up a second shirt only much larger of course.  I was secretly hoping I could get it  and a letter to him (and not a fan club office that he would never see) and I did!  The shirt laid on my desk for several weeks and finally someone came into my office and ask me what I was going to do with that shirt and I told him.  He said he knew his home address!  Very skeptical, I sent it to the address.  About 4-5 days  he called the cave as my letter was written on letterhead stationery.  We had the best conversation at least 5 minutes and talked about a variety of things.  He was home at that time because his youngest daughter has just graduated from high school.  So in a short thank you note I sent my cell phone number as he visits his brother who lives about 2.5 hours from here.  I told him if he ever brought the family up to Mark Twain Cave I did not want to be at the bank or post office and miss him.  You never know.
So now I have my nerve up and sent a letter to Jay Leno.  It has recently been announced that he has won the Mark Twain Prize for Humor and will be honored at the Kennedy Center in Washington, DC.  He will be speaking at a small college in St. Louis and I have invited him to come here to get a little background on Mark Twain.  Again, you never know.
Linda Coleberd 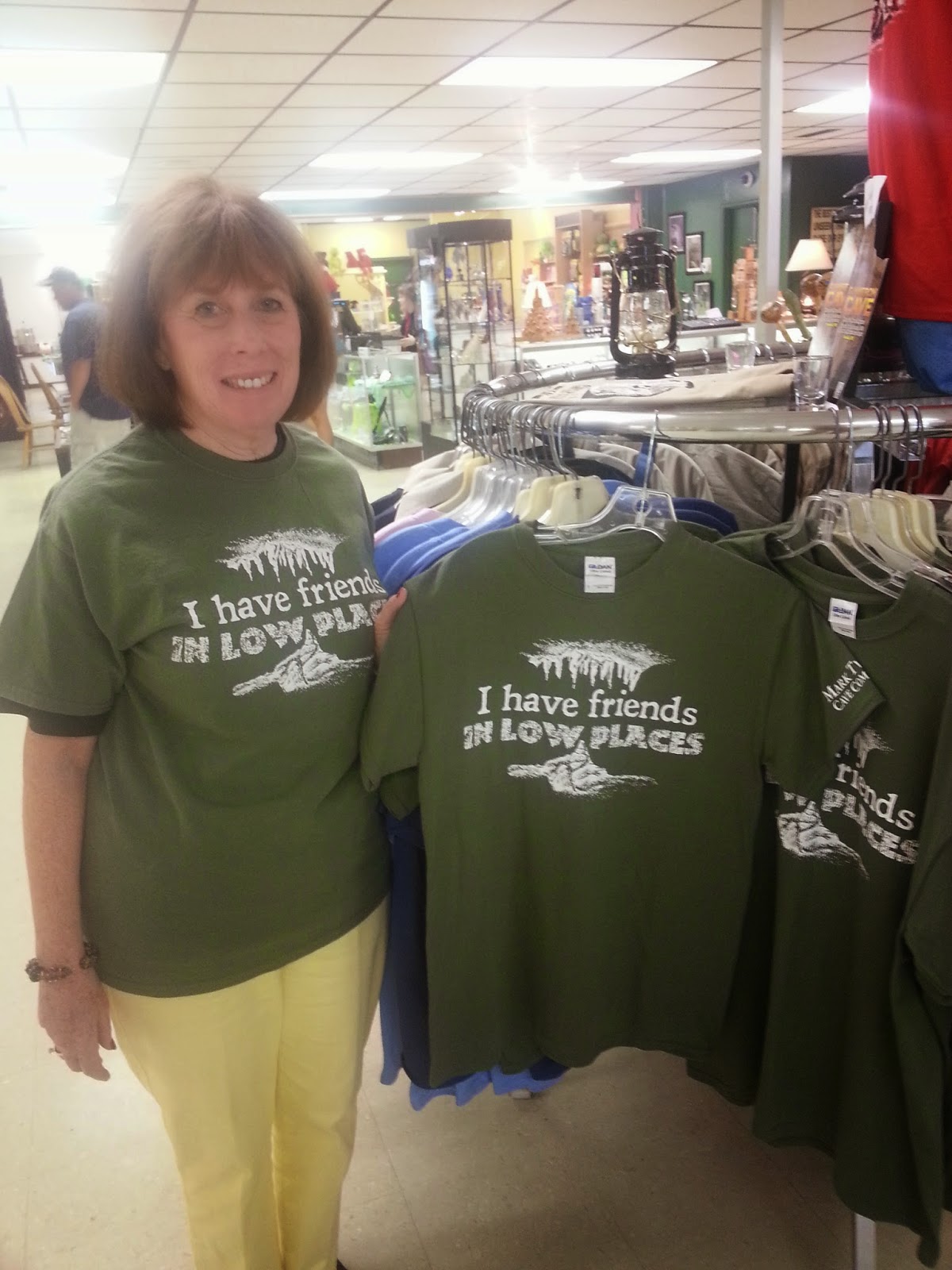 Glenwood Caverns Adventure Park
Introduces New Ride - Canyon Flyer
Anywhere other than the Glenwood Caverns Adventure Park, the “Family Swing” would take up to 24 thrill seekers about 40 feet off the ground at a top rotational speed of 35 mph. That’s a pretty good ride, but local riders and visitors are in store for more. Glenwood’s version, renamed Glenwood Canyon Flyer by contest winner Linda Hayes, will spin riders 1,300 feet above Interstate 70 and the Colorado River.
“We can take any benign family ride and make it a thrill ride by putting it on the edge of a cliff,” said Nancy Heard, operations manager for the Adventure Park. It was no simple feat to build such a thing on the edge of a cliff. First, the ride came from halfway around the world. Half of the project’s $400,000 price tag was shipping, prep and installation.
“We had to hire a structural engineer and a geologist to inspect the rock,” explained owner Steve Beckley. Glenwood Caverns takes safety seriously. In addition to third-party inspections, every ride is either inspected every day by Heard, certified by the National Association of Amusement Ride Safety Officials, or by four first-level NAARSO inspectors on staff.
The park last fall purchased a Family Swing from SBF/Vista, an Italian company. In March, managers flew to Italy to inspect the completed ride. It was then disassembled and shipped across the Atlantic to Houston, taken to Denver by train, and trucked across the Divide to Glenwood. It was constructed on a prepared pad between the existing giant swing and the Cliffhanger Roller Coaster, just above the park’s Exclamation Point
The Glenwood Caverns — also known as the Fairy Caves — were off limits to the public for more than 80 years before Steve and Jeanne Beckley bought the land, installed lighting and started conducting tours on Memorial Day 1999. In 2003, they replaced the bus shuttle to the cave’s mouth with a tram, and begin installing other attractions.
Initially, the park averaged around 30,000 visitors annually. Last year, 165,000 people made the trip up the tram. During peak season, June through August, the caverns has about 185 employees, up from 30 in the winter.
Most visitors are families from the Front Range, although the park also hosts events including school field trips and birthday parties. Steve Beckley credits tourism with keeping the local economy afloat during the recession. He doesn’t think the Adventure Park competes with other local attractions such as Glenwood Hot Springs, but instead increases the town’s overall tourism. “Glenwood is really be coming a place where there’s so much to do,” he said.
To See The Glenwood Caverns Flyer in action, view the video here: https://www.youtube.com/watch?feature=player_embedded&v=3HpzNs4ArPI
The Beckleys don’t draw a salary, instead investing profits back into the park. It has allowed them to add something new almost every summer, with more than a dozen attractions so far.
This year, in addition to the Glenwood Canyon Flyer, they’re drawing inspiration from Silver Dollar City in Branson, Mo., and adding more musicians, a “cowboy camp” venue for the kids and a blacksmith shop. The zip line has also been relocated, and the wagon simulator has been decommissioned.
Last year, they unveiled an expanded cave tour, adding a new leg to the historical tour complete with Edison bulbs. Although only 10 percent of the 3.5 miles of chartered cave are included in the standard tours, the trip is long enough to justify splitting it in two. “It’s still our number one attraction,” Steve Beckley said.
The rides get attention. On still days, screams from its giant canyon swing can be heard from as far away as Lookout Mountain.“The whole family enjoys it whether they ride it or not,” said Mandy Gauldin, who does public relations for the park.
Beckley hopes the Glenwood Canyon Flyer will draw a broader range of riders than the adjacent giant swing. Though the ride itself is tamer, the platform will be surrounded by a net instead of a railing, allowing passengers to fully experience the drop.
“I think this one may turn out to be my favorite ride,” Beckley said.
Will Grandbois
Post Independent, Colorado Springs
Posted by National Caves Association at 3:38 PM No comments: